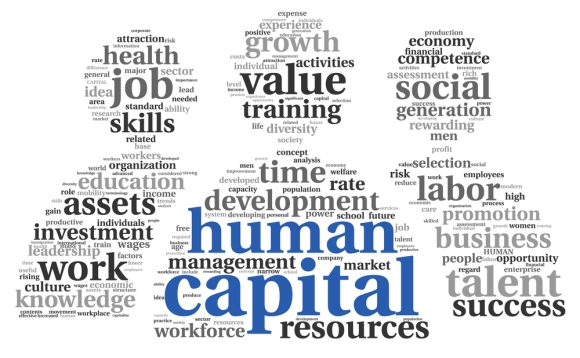 Capital in economics usually refers to assets that yield income and other useful outputs over time.  People usually of bank accounts, shares in companies, assembly lines or steel plants.

However these are not the only forms of economic capital.  Education, expenditures on medical care and training in business skills are also capital.  That is because they raise earnings, improve health or add to a person’s good habits.  Economists regard these as investments in human capital.  This is because people cannot be separated from their knowledge, skills, health or values in the way they can be separated from their financial and physical assets.

Increasingly, skills such as creativity, empathy, contextual thinking and big picture thinking are becoming increasingly important.  These provide a critical response in maintaining high standards of living in the face of low wage competition.

It is an aggregate economic view of people acting within economies.  An attempt to capital social, biological, cultural and psychological complexity as they interact in economic transactions.

So should the sum of us be simply expressed in terms of our relative merit in an economic system?